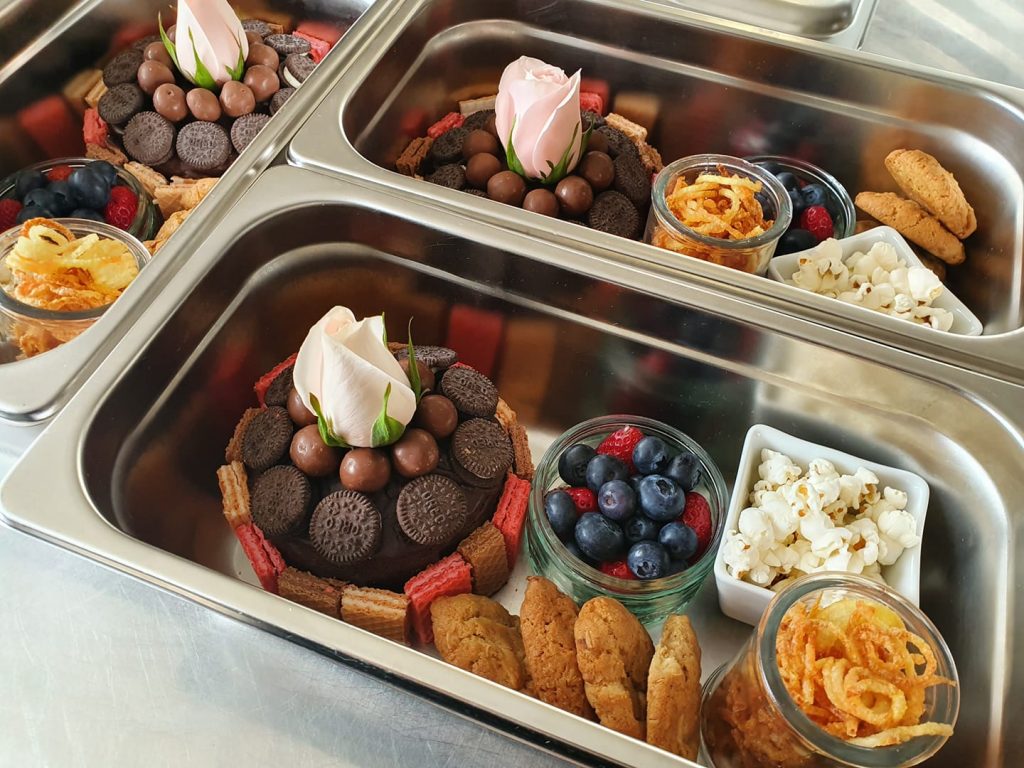 Gina’s Kitchen makes delicious homemade meals, like a dinner fairy who gets fresh ingredients and does it for you. But what got my attention and let to an introduction to Gina, is that her food comes in reusable packaging.

Yes, take-away meals from a home kitchen in reusable packaging. Oh my this is like sustainability made easy. Making life effortless for the environmental conscious foodie, and time poor parents, this is fantastic.

Gina is a musician by trade and has worked in marketing for publishing companies for 15 years. She’s had some cancer, and was at a point in her life where she was thinking about what she was going to do next. A friend asked her, what she liked to do, and Gina said, “I really like feeding people”.

She’s fed people all her life, in one way or another. Gina would bake for the orchestra, which she was a member of. Then she started a lunch club where people would pay and she would cook for them. She’s also worked in café’s too.

Gina suggested to another friend, maybe I could open and run the school canteen, and also have take-home meals as well. You know pick up a kid and pick up a lasagne. Her friend said that’s fine, but I need dinner tonight. Can you just start cooking now? So, Gina rose to it and helped her friend out, with dinner. Then she started doing meals for her every once in a while. And that was how Gina’s Kitchen was born.

This evolved into functions and catering, and she loved it. She moved on from the school idea because she realised they would want a regular menu with the same thing. And Gina is at her best being creative working with what’s fresh and in season.

If she had leftovers from a catering job, she’d put a call out on social media. This was so popular, that in the weeks she didn’t have functions to cater for, she starting sending a text to a list of people who were interested in her meals. So home cooked dinners for the neighbourhood became a regular thing.

The same thing with meals. It’s a much better idea for the person with time and the energy to cook for the street and the neighbourhood. I love the idea of someone making a meal that’s just as ‘homely’ as what I would cook, but because it hasn’t taken my time, it’s even better, and doesn’t feel like takeaway.

When Gina started out, she was using foil takeaway containers which came wrapped in plastic, with a paper label. She kept thinking that was too much waste for a home cooked meal. Gina looked around and there are many great ideas out there for convenient home cooked dinners, but the packaging, oh the packaging.

Some people brought their containers to be filled, which was fine initially, but that got a little complicated, when it got bigger. Because of the setup, people had to leave their containers behind and Gina had to remember whose it was, and what they wanted.

Gina realised it was going to be much easier if she provided the reusable containers for her customers to use. So, she did some research and found stainless steel containers used in bain marie’s would work for her setup. They don’t look like something in your kitchen, which makes it easier for returns too. You simply wash the containers as normal to get the food off, and they can go in the dishwasher. Then they’ll get re-washed by Gina, before re-filling, so it’s very easy.

Gina cooks the meals in the container, rather than cooking, cooling and dishing it out. So reducing waste created an efficient process for her. Some people keep meals for later in the week, some take them straight from the oven to their table.

Gina prefers this to the catering she was doing, and is now making about 450 meals per week. As Gina’s Kitchen grew, she hired staff and casuals, which has also given some locals an opportunity to work.  She employed some teenagers after school and they started with preparing by chopping carrots, pumpkins, onions or whatever. Which helped Gina because she could just cook the next day.

Over time, the teenagers, got more responsibility, cooking the meals from start to finish. Which she’s very proud of. Gina’s says that some of the kids are now cooking more extravagant meals at home, which is fantastic

It would be great if there were home kitchens like this in all suburbs, where someone who wants to cook yummy meals, with fresh ingredients. While taking into account environmental factors and community connection.

Gina encourages others to set up like this, and feed their local neighbourhood too. She loves this as a business model. Gina explained that she’s not looking to make squillions of dollars, but she makes an honest income and can pay staff fairly. The idea is to keep it local, it works for her and also makes her really happy.

Doing this for a few friends is one thing, but if you want to set a busines up, you need to get your kitchen registered with your local Council. Contact your council directly, as there can be variance in requirements with different councils.

How does it work?

The meals are pre-ordered, which gives certainty to Gina about the quantities to produce, and this helps to reduce waste too. Many of Gina’s customers are people who are interested in the environment, and they’ll buy more regularly. Which confirms the merit in sustainability as being core in a sound business model.

Interested people are added to her ‘secret text list’ and are notified of the menu for the week. Well it’s not that secret, you just have to get her number from the website and text “What’s for dinner” and you’re on the list.

The ordering is done to fit in her timetable, rather than having people order ad hoc. She tries to be flexible for her customers, but it has to balance with her family life too.

The other thing Gina does to reduce waste, also has a beautiful social impact. She’s identified a few people who are doing it tough. She has them on her ‘leftover list’ and she’ll contact them and give them a beautiful home cooked meal when she can. Which is her way of connecting to people and giving back.

She loves being local and providing this service, so people don’t need to “uber eat”. Which is full of packaging waste, and has a much higher environmental impact.

A question I get asked, as a sustainability coach is how can we do better with Uber? Which is always a tough answer, I’ve never used them. Maybe you can email, but if you want to do better, then search for a Gina near you. Give them a nudge, and offer to pay them for a home cooked meal. You never know you might spark someones passion to feed others delicious home cooked food.

Gina’s Kitchen is based in Flemington. Here is here the website https://ginaskitchen.com.au/

If you have a ‘Gina’ in your area, we’d love to know. Pop it in the comment below.

One thought on “Gina’s Kitchen – Delicious meals in reusable packaging”